Once I finished Switching It Up, I went back to clean up Forging Love because I knew that you guys would want to read this story! One thing I realized was that I’d overwritten the story. If you’ve read these, you know that there’s a point when Their stories all overlap. I didn’t want to tell that from too many point of view, so I cut the ending of Forging Love. Some of what I cut wasn’t an overlap–it just didn’t fit into the timeline I’d established.

So this is an unedited scene I cut from Forging Love. It features Jessica and her father working together to create the diary that sends Jessica and Brea on their adventure. 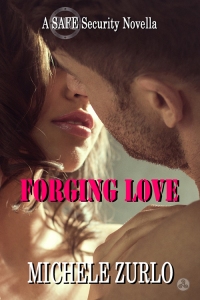 At home that afternoon, I fired up the stove and the coffee maker. Warren watched me, his chin wrinkled in confusion. “I thought you just had lunch?”

Leon had met Sylvia and me at a place renowned for crab legs, and I’d stuffed myself because who can stop when such deliciousness is in front of them? Not me.

I set out some papers where I’d handwritten the text of a false journal, the first step in the forgery process. Then I took one sheet and crumpled the edges. “I’m making a present for Brea.”

Warren studied the situation. “It looks to me like you’re aging paper. Are you forging for fun now?”

Though my parents knew a little about my past, we didn’t often discuss it. Certainly my father had never brought it up in a joking kind of way before now. I met his gaze and smiled. “Art is fun and fulfilling. Forging is an art.”

“Therefore forging is fun and fulfilling.” He pulled out a bar stool and settled on the opposite side of the counter. “Can I help?”

When I was young and learning the trade, BS had spent many an hour helping me perfect my skills. I didn’t know how I felt about essentially doing the same thing with the man who actually was my father. I took a deep breath. “Sure. We need all the cookie sheets.”

He got up and searched through the cupboards. “You can’t use the flat ones because your mother would kill us if they got ruined.”

Sylvia had an impressive collection of baking pans, and when the convection baking sheet craze had gripped the world a few decades ago, she’d signed on wholeheartedly. “We need ones with edges.”

“You’re going to soak them in coffee.” Warren caught on quickly. “I thought you were supposed to brush it on.”

“Brushing it on leaves obvious markings. I prefer to use a sponge.” I smoothed out the paper I’d crumpled. “First we wrinkle the papers on the edges. Since this is going to be a booklet, it’s reasonable that the middle of the pages wouldn’t be wrinkled, though they might be torn.”

I walked him through the process of aging paper. First I took some wet coffee grounds and strategically sprinkled them over a few of the pages. Then I poured a thin layer of coffee around the papers. “Never pour it directly on the paper. That’s an amateur move.” We scored small holes in some of the pages, and we mined an extra sheet for small bits to roll into balls. I showed Warren how to press these to the papers so that they melded together to create irregularities in the pulp.
Warren sponged away excess liquid. “Paper was made by hand back then, so irregular is the normal look.”

“True.” I rummaged through the deep drawer where Sylvia kept the graters, mashers, and other kitchen gadgets. I found a measuring spoon and a grilling fork. “These can be used to make additional marks on the pages.” I showed him how to use just the right pressure. Letting him help at all was taxing on my nerves. Not only was I beating back flashbacks of BS coaching me through the rudiments of forgery, if Warren messed up one of the pages, it would take a lot of time to recreate the text, and I’d stayed up really late last night composing these.

We stepped back to inspect our work. “Now what?”

Sylvia came into the kitchen, her hair still wet from her recent shower. “Bake what?”

“Pages of a journal detailing the location of buried treasure.” Warren beamed.

“Jessica is teaching me how to forge stuff.”

Sylvia’s mouth opened and closed like a fish out of water as she searched for a response. Finally she focused on me. “Do you think it’s wise to start down that path again?”

“It’s a present for Brea.” When Sylvia continued to give me a stern look that must have sent Leon scrambling for cover, I elaborated. “She won’t be fooled. She knows my work.”

Sylvia didn’t buy my story. She wasn’t as desperate as Warren to connect with me. She crossed her arms. “What do you hope to accomplish by giving this to her?”

I decided it was best to come clean. “David and the rest are heading out on missions tomorrow. I’m hoping Brea will decide to go somewhere with me instead of just sitting around, waiting for them to get back. She’s been researching legends of buried treasure in San Tesoro, so I thought this presented the perfect opportunity to go looking.”

Warren removed a sheet pan from the oven. “They have nice beaches. I hope you’re not going hiking through a jungle and up a mountain. While you’ve come a long way in the last nine months, you’re still not up for strenuous physical activity.”

I wasn’t about to rule that out. Maybe I wasn’t fully recovered, but that wasn’t going to stop me from pushing myself. “I’m sure we’ll spend some time looking for treasure. There’s a treetop hotel there where we can basically stay in treehouses.”

This was a true statement, and I used it to put Sylvia at ease. The last thing either of them needed right now was to spend time worrying over Brea or me. This was why Jesse, David, Dean, and Frankie treated most mission details as if they were classified; they didn’t want us to worry about factors that were beyond our control. Lying was sometimes a sweet and thoughtful kind of manipulation.

I hoped to be back in time to make my Thursday appointment with my shrink, but I kept that to myself. “I’ll be fine. This’ll be a kind of therapy for me.”

“Do you want us to come with you?” Sylvia abandoned her firm stance. “It’s been a long, long time since we’ve gone on vacation with you girls.”

I’d been inspecting the finish on the dried pages. Once the booklet was put together, I’d distress the edges. Sylvia’s wistful tone made me feel guilty. I straightened up and looked her squarely in the eye. “Maybe next time. I’m thinking this’ll have more of an irresponsible feel than a bring-your-parents-along feel.”

I lifted a brow. “I hadn’t planned on it being that fun, but I’ll make sure I’m covered.”

Sylvia eyeballed the baking sheets. “Since you have those out, let’s make snickerdoodles.”

It ended up being a nice family bonding experience.

The next morning, Warren dropped me off at my treasure store. He hauled my bag inside. “You’re sure about this?”

“Yes. Even if we don’t go anywhere, I’ll stay with Brea while David is away.”

“You’ll call and let me know either way?”

I kissed his cheek. “I promise.”

iTunes, KOBO, BN, and others: https://www.books2read.com/u/mYgBgx