Elizabeth Thornton is left all alone in Georgian England after losing her parents in a tragic accident, so she travels to Cornwall to live with her kindly, older, and very proper Aunt Judith. Soon, however, she begins to suspect her aunt of hiding something nefarious. Determined to learn the truth behind the strange goings on, she sets out on a quest for the truth. A quest that leads to danger, and trouble with the law, and a very handsome smuggler with a firm hand and smoldering, sexy eyes who is as determined to keep Elizabeth safe as she seems to be to put herself in harm’s way. 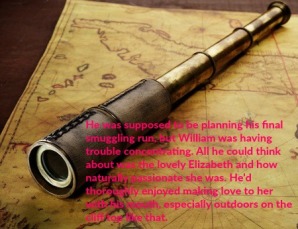 William is growing tired of the smuggler’s life of danger and instability. If he can just finish his last run, he can give it all up and finally settle down, find love, and start a family. But he already has a preventative officer hot on his heels who is determined to end his career and throw him in jail – or worse. The beautiful, headstrong Elizabeth is a complication he does not need. But she, too, is hot on his heels – and irresistible. Now he must avoid capture, and find time to discipline this woman with an appetite for adventure, who seems determined to steal his heart.

When these two are together passions ignite, sparks fly, and danger lurks around every corner. Can Elizabeth and William avoid the law? Will they finally find the happiness that has so long eluded them both?

William looked all around the small beach and then he saw a pile of clothing at one end. Where the hell was the annoying girl? And then he saw her in the water and his heart stopped. “God’s teeth!” Was she trying to drown herself? What person would voluntarily go into the sea like that? “I’d better fetch her out.” Obviously, she didn’t know what powerful under currents there were around this cove. He ran to the water’s edge, but then she emerged from the waves in just a long sleeved shift clinging to her lovely body and his eyes greedily took in the sight.

Merciful Zeus. The soaking wet and sheer material offered her no cover whatsoever and he sighed at the sight of long shapely limbs before his eyes travelled up to see the raven curls between her legs, her womanly hips, small waist, and lush breasts. The fact that she was wearing the totally inadequate shift as some ridiculous attempt to preserve her modesty was somehow more arousing for him than if she was naked.

“I thought I told you what I’d do to you if I caught you down here again, Elizabeth?” he rasped out and watched in satisfaction as she jumped at the sound of his voice. She looked up with wide eyes and vainly tried to cover her breasts and sex with her hands. “William!” Her voice was breathless in surprise, embarrassment and more than a little dismay.

Good. The chit realized that she was in deep trouble.

“I’m waiting,” he growled. “What did I say would happen?”

Despite her vulnerable state, her chin came up and her blue eyes glared defiantly at him. “You didn’t mention the beach specifically. And I shall go where I like.”

God, she was provoking. He clenched his teeth. “Come here, Elizabeth.”

She simply glared back at him. “No.” And she continued to stand in the shallows, one arm crossed over her breasts and her other hand placed over her sex.

“No?” William was incredulous. How dare she ignore his command?

“You have no right to lay your hands on me,” she told him. “So just go away and let me dress in peace.” Blue eyes continued to glare defiantly at him.

“You think I will not come in the water after you, girl?”

Elizabeth blinked at him but then looked at his pristine boots and must have thought she was safe. “And ruin your boots?”

It was her scoffing that did it. William smiled, before he surged into the water and grabbed her. He slung her over his shoulder before she had time to react. Then he turned and strode out of the water with her, gripping her thighs firmly when she began to struggle and pummel his back with her fists.

Too late. She’d had fair warning.

William left the water and walked up the beach with her. “I can,” he told her and slapped her bottom when she continued to hit him. “Stop hitting me, Elizabeth and I might go easy on you.”

Her response was an indignant squawk when he smacked her. Then she hit him harder and kicked more fiercely. “Go to hell!”

William gritted his teeth. By god, she was going to get some extra strokes for this. He looked around the deserted little beach. Should he do it here? Sit on a rock and put her over his knee? No. He was better off taking her to his room in the tunnel – for some privacy.

I’m on tour with the Dragon Kisses Trilogy. Over the next few months, I’ll appear on a bunch of different blogs. Some will have reviews, some interviews, and some will feature guests posts written by me. Here’s the link to my first appearance–at Jacey Holbrand’s blog–where I talk about the best and worst parts of being a writer. Click HERE to access the post, and leave a comment for a chance to win a $10 gift card to Amazon or BN.

Have you been waiting on the edge of your seat to find out what happens with Lacey and Dylan after they finally decide to be together? Well, wait no longer! Kiss Me By Moonlight (Kiss Me #2) is now available.

Hey there. It’s Lacey again. Falling in love and landing Dylan hasn’t been the panacea I thought it would be. For starters, he moved into my apartment without asking, and he continues to have no respect for my need to have things in sets of six. Pile that on top of my emotional upheaval after losing my stepfather, and you have a recipe for disaster no amount of German chocolate cake can cure.

Yes, Lacey Hallem’s life remains fraught with challenge, but you know she’s a fighter. Forming a talent management agency with her best friends has been the best career move she’s ever made—even if it’s the only thing currently working according to plan. Lacey’s OCD is getting the better of her, and this time her hands aren’t the only casualty. When her lies ruin her relationships with both Kiss Me Goodnight and Dylan, she’s forced to confront her demons in ways she’s never had to before. As she once again faces her past, can she learn once and for all to let love and friendship through the barriers she’s built?

​ Both harrowing and hilarious, this conclusion to the tale of Lacey and Dylan will leave you laughing, crying, and fanning yourself—sometimes all at once. Michele Zurlo triumphs again in this moving story about life’s quirks and what we all have to do to get by.