Building a new life after a failed marriage isn’t easy.

Hoyt Graziano is determined to open a coffee shop in Bear’s Cove. It’s the perfect small town for his shop, Perfect Blend. Only it’s also the town where his ex-husband lives.

Lusting after his brother’s husband drove Kofi Freeman away years ago.

Now that they’re divorced, he allows himself an afternoon of bliss with the man who stars in every one of his fantasies.

But his loyalty to his family makes him reject the vulnerable omega afterward. It doesn’t take Kofi long to realize that he made a terrible mistake, but Hoyt isn’t impressed with his apology. He’s not willing to forgive and forget.

How can he prove his love to a prideful and stubborn omega whose heart he didn’t mean to break?

A man lounged against his door, his wide shoulders spanning most of the distance. His body narrowed where he’d tucked his shirt into jeans, showcasing the powerful muscles of his hips and thighs.

Hoyt’s gaze roved down and back up, taking in the full lips and how the wind lifted strands of black hair, messing them up in a way that only increased the sexiness. Then he took off his sunglasses, and Hoyt found himself nailed to the spot by those brilliant blue eyes. The sky reflected in them, casting them an even darker hue.

He sucked in a breath and forced his body not to respond. This was just like every fucking holiday and family-oriented get-together for six of the past seven years. He’d forgotten the physical way his body reacted to Kofi, and it irritated him. “What do you want?” A bit of that annoyance came out in his voice, but he didn’t care. Kofi had it coming.

He moved away from the door, which put him closer to Hoyt. “Why didn’t you tell me that you’d talked to Chase?”

Hoyt rolled his eyes and moved past Kofi. He stuck the key in the lock, but it wouldn’t turn. So now his attempt to make a dramatic getaway was ruined. He jiggled the handle and tried again, but it didn’t work.

Kofi’s hand closed around Hoyt’s as he took over. His jiggling worked better, and the lock disengaged. He pushed the door open, stepped back, and handed the key to Hoyt.

When Hoyt tried to grab it back, Kofi held tight to the part of the key ring with a dangling thingy printed with The Black Bear Inn’s logo. A warning flashed in his eyes, the kind that might have him on his knees if the circumstances were different. “Hoyt, don’t be pissy. I had a legitimate concern.”

Hoyt parked his free hand on his hip. “Let go of my fucking keys. I didn’t ask you to come here, and I don’t owe you an explanation. You’re not my alpha.”

“You asked me for a favor.”

At the reminder, heat traveled up Hoyt’s neck. Fucking fair skin got blotchy whenever he got mad. “You said no, and I moved on.” 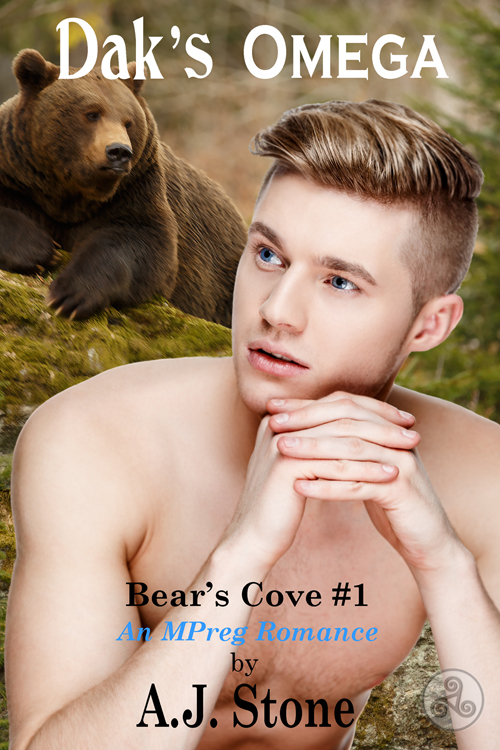 Bear’s Cove is Dak’s chance to start over. Chase has been an outcast his whole life. Can this handsome alpha win the heart of a wild omega?

Bear’s Cove is Dak Freeman’s chance to start over.

Leaving Forrest Hills and his ex-husband behind, Dak vowed to start over as a deputy in the small, bear-shifter town of Bear’s Cove. On his two first nights, he’s called to a nightclub to restore order. Both times, handsome Chase Longfellow is the one causing problems.

Chase Longfellow had been an outcast his whole life.

Waking up in a jail cell wasn’t a new experience for Chase, and this time was more fun because it afforded him a chance to flirt with the virile new alpha Daddy on the other side of the bars.

Dak’s alpha nature means he can’t help but take the wayward cub in hand, and when the omega responds to his dominance, Dak’s fractured heart begins to heal.

A passionate night leaves Chase pregnant, but when Dak’s ex returns and tragedy strikes, everything is threatened. Is their new love strong enough to survive?

Nerves randomly fired in Chase’s body, making him feel off-kilter as he entered Dak’s house. He should have come straight here from work. Beneath his greasy mechanic’s coveralls, his clothes had been in fine shape. Except they smelled like the garage, and Dak had seemed strangely distant when he’d come by.

Dak’s fingertips were a gentle pressure on Chase’s lower back. “Are you hungry?”

This wasn’t a date. No matter what kind of mixed signals he was getting from Dak, the last one had been clear—he wasn’t flirting. Of course, Dak hadn’t flirted at all. In flashes and moments, there had been hints of desire, the chemical pull of attraction, and that spanking. The skin on Chase’s ass heated just from the memory.

This wasn’t a date—except Dak had changed into jeans that made the bulge at the apex of his thighs look that much larger and a shirt that emphasized his wide shoulders and strong chest. The short sleeves strained to cover Dak’s massive biceps.

Chase leaned into the hand on his back, turning to face Dak. Inches separated them. He held up the key to the patrol car. “I brought these.”

“I’m hungry.” He didn’t specify exactly what he was craving. Though whatever was in the oven smelled scrumptious, Chase wanted to taste something else. Right now, he wanted another kiss from the deputy. Not one to wait for what he wanted, Chase rose to his toes and pressed his lips to Dak’s. It was an offering, and his heart pounded so hard he thought it might burst out of his chest.

Dak’s fingertips slid to Chase’s waist, the pressure increasing until his grip was firm. Dak’s tongue traced along Chase’s lower lip, and Chase opened to this gentle request.

Once he did that, all bets were off. Dak gripped the back of Chase’s neck, tilting his head to let Dak’s tongue inside. With his kiss, he ravaged Chase’s mouth and liquefied his bones.