The balance of life and writing is one of the big questions that comes up all the time for indie writers and apprising authors. Other artists, as well as close friends and family ask me how I find the time. I will tell you that holding down a full time job, the joys of homeownership, being a worthwhile spouse and guardian of several little fur creatures is already a taxing demand. Adding to that, being an author with all the accompany dreams of publishing a best seller and you can quickly see that twenty four hours in a day just feels inadequate.

I am fortunate that I have a supportive circle of loved ones who are willing to afford me the needed time to shut out the rest of the world and pound away at my lap top when I have to make a writing deadline. Even with people that will let me comment some time to my art I still need to log some extra hours in order to tell my stories. I think that is the crux of the issue, in that you actually have to go out of balance in some aspects of your life if you want to pursue your passions outside of family and vocation. I take my computer with me to work and scarf down my meals when I have a few stolen moments so I can actually write on my lunch break. They say that 3:00a.m is the hour or writers and poets and they are not wrong. Many times I will tuck my wife into bed or get up extra early so I can creep down stairs and put some words on the page. Being an indie author is by and large about stealing moments from the daily grind and putting them towards your craft. I say that if I can produce 1,000 words a day then I am happy with my progress and can sleep soundly.

I think that in the short term, if you want to seriously pursue art as a profession then you need to be prepared to have the scales tip far out of your favor for a time. It means taking on a lot of stress, anxiety and heartache so that you can start building a foundation. I think that, like anything else, writing is as much about paying your dues as it is about being a good. It is my hope that the world can only ignore a formidable artist for so long and that years of passion and dedication shall eventually bring a happy balance for those who stay the course.

Check out Calling the Reaper 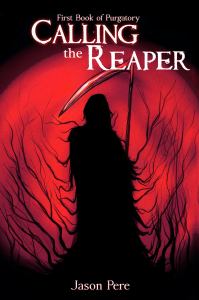 The time of the Unity has ended. Now, the realm of man is stranded between Paradise and Purgatory. The Valkyrie and Reaper battle over the fate of all who pass from the land of the living and into the afterlife.

Eight mortal spirits from vastly different worlds tread the same, inevitable path toward their last, crucial decision. Within them all exists the defining conflict every man must face—to look upon the end of their life with glory and honor, or to give credence to their baser longings, calling the Reaper to their own demise.

In this rich, harrowing tale of pride, deceit, honor, vengeance, and redemption, each individual must battle their inner turmoil, facing the sacrifices they have made before their unavoidable end in the land of the living.

But their last day in life is also their first day of death amidst the terrors of the underworld. Lord Master Death wants them all…and the real battle has only just begun.

Aristo reached far within and blocked all the pain shooting through his being. I am

Praetorian, my flesh does my bidding. Again, he commanded his eyes to open. When he finally managed to force them open, the agony consuming his head must have felt very much like staring straight into the blazes of the sun. He felt the tearing of skin as his world instantly turned from the darkest black to a moment of brightest white. His eyes watered heavily and he blinked, trying to clear away at least some of the dried blood which had sealed his eyes shut. For several moments, everything was a blur, but then he could distinguish colors and shapes again.

He nearly wished that he had in fact been blinded; he would have at least been spared the image before him. Aristo had been wounded in battle before, but never like this. His body lay covered in a blanket of dried crimson. No one would have known that he bore the deep purple uniform of the Praetorian Legion had they even bothered to look at him. It was confounding that he had bled so profusely and could still draw breath, still feel the beat of his heart within his chest. A moment of warrior’s pride overtook him when he studied his twisted form and realized the excruciating pain was not unwarranted. Then he remembered.

Captured, he thought. I’ve been captured.

Jason Pere is a born-and-raised New Englander. He always had a passion for the arts and creative storytelling. At the age of thirteen, Jason took up the craft of acting for film and theater. He pursued that interest for over a decade until refocusing his medium of expression into writing.

At first, Jason took a causal interest in writing, starting with poetry and journaling. Over time, he honed his direction and finally began writing larger works. In November of 2012, Jason self-published his first book, Modern Knighthood: Diary of a Warrior Poet.

Since then, Jason has continued writing on his own, mostly short stories and poetry. Calling the Reaper was his first experience committing to a full-length Fiction title.

In early 2015, Jason became affiliated with Collaborative Writing Challenge (CWC). Since then, he has joined many other writers on numerous collaborative projects. Jason is a regular contributor to CWC and is scheduled to have multiple pieces of his work appear in their publications throughout 2016.

You can find out more about Jason Pere’s involvement and publications in collaborative fiction at: http://www.collaborativewritingchallenge.com

To connect with Jason, check him out at: http://www.facebook.com/jason.pere.7

Jason also writes fanfiction for Team Covenant on their Blog of the Pheonixborn, dedicated to the new game by Plaid Hat Games, ‘Ashes’. Go to http://teamcovenant.com/ashesonline/ to read Jason’s flash fiction work.

One randomly chosen winner via rafflecopter will win a $50 Amazon/BN.com gift card.

Enter to win a $50 Amazon/BN GC – a Rafflecopter giveaway

Look for these titles coming your way in 2021!