Ever wonder how I got to be this way? This is a sort-of rambling narrative about an event in my childhood. I hope you can relate. 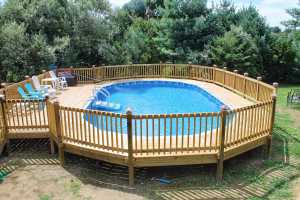 My pool came later, after I almost drowned and my mom made me take swim lessons. First came the relatives. I had a lot of aunts, uncles, and cousins. We all lived close to each other, so we saw them all the time. I played in the front yard with my cousins while my dad and uncles, Doug, Danny, and Junior measured out and dug out the grass so the pool would be level. Uncle Doug was OCD, so that took half a day. Soon the round structure was up. It was big, blue, and deeper in the middle. I thought we’d get to swim that day, but I was wrong. They didn’t even put water inside. My uncle Doug, whose name was actually Charles, said it had to be enclosed first. I envisioned a small house-looking thing with glass on all sides, like the pool houses I’d seen on TV, but never in real life. There was no way they could afford to build a house around the pool, I thought even though, between all my uncles, we had the skills.

Disappointed, a little mad at this cruel joke, I went back to my cousin. My head hanging low from the weight of despair. We sat under the mountain ash in the front yard, all of us sad. THe tree shed little orange berries that were not fun to sit on. We picked them up and threw them toward the street.

“They’re mean,” said Nick, the second oldest among us. “Why would they put up a pool and not let us swim?”

Elsie, bossy because she was born that way (and maybe because she was the oldest) said, “They’re not building a house around it, stupid,” I think she was calling all of us stupid. I wanted to throw an orange berry at her, but i knew she’d punch me and then tell on me, and then I’d be the one in trouble. “They’re building a deck.”

Sure enough, when we looked over to the side yard, we saw uncle Doug and my dad cementing huge posts into the dirt while Junior and Danny used a post hole digger to make more holes. A few days later, we had a huge wooden deck that went all the way around the pool. I even had a ladder on a hinge so that little kids couldn’t climb up. For additional security, my dad put a bike chain on it with a combination lock. Rules were posted that said, “No swimming without adult supervision.

Suddenly we were the most popular house in the neighborhood. It was like crepuscular rays spotlighted our yard. I’d thought it was ridiculous how many kids would come running when my grandpa came over and gave out candy by the handfuls. This was nothing by comparison. Everybody came over–the snotty kid down the street, the dirty kid from a few doors down, strangers from the next block over. Even relatives visited more often. I didn’t mind relatives because it always led to fun times and a cookout.

For starters, when people come over, I had to act like a host. Instead of just kicking back with a floaty, I had to get waters, snacks, or whatever else the guests needed. My mom hated it too. We were not rolling in dough, and she did not have the money or time to feed all these kids.  To top it off, she started working midnights. The worst were the people in our neighborhood who would come over, knock on the door, not caring if they woke my mom up. They’d ask, “Can I swim in your pool?” They had moved past pretending like they were there to play with me. Billy and John John were the worst offenders.

I didn’t take long for my mom to reach her limit. She put her foot down. The sign about needing an adult at the pool was replaced by a sign that read, “Parents must sit on the deck and watch their own kids swimming.”

After that, the only people who came over were relatives and true friends.