1. Tell us about your first kiss?
Drew and Maxine’s first kiss was rather awkward. You see, she spilled champagne all over him at a party that she had to attend for work. Of course, since Drew was Maxine’s teenage crush, she had to carefully hide from him all night…until he stalked her on the balcony. It was the SoHo Grand Hotel’s penthouse suite. All of New York City twinkled below them. And just as he captured Maxine in his arms and held her in his stronghold while he kissed her breathless, it began to rain…
2. Share one line from your story. What do you love about it?
“This whole experience left her without words, yet clamoring to tell him how she felt closer to him than ever.” In Fire and Ice, recently engaged Maxine and Drew engage in waxplay for the first time. Maxine truly embraces her submission in this story, and she proves to Drew that she trusts him implicitly. That’s what Domination and submission is all about—trust—and Maxine exemplifies at this point in their relationship.
3. What is the biggest risk you’ve ever taken?
My biggest risk in life was moving from a very small town to New York City. Here, I’ve built a career in communications all on my own, and I’m so proud of my accomplishments outside of publishing. New York has also served as my inspiration for my writing. On every corner, something is happening—there’s a story to tell. So my biggest risk was truly my greatest reward.

Fire and Ice by Juliet Braddock appears in Dominant Persuasions 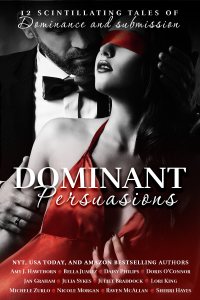 What happens when a blizzard immobilizes Manhattan on Valentine’s Day…and a sassy little sub is stuck in her Dungeon with her beloved Dom? With candlelight and a roaring fire to keep them warm on this frigid afternoon, sparks fly between Maxine and Drew as he attempts to cool her down with a bit of tantalizing tenderness…

Enjoy this excerpt of Fire and Ice by Juliet Braddock

Louboutin heels in one hand and the silky little garment in her other, she made her way to the full-length mirror to slink into her Valentine’s Day outfit. Once she’d pulled the panties on, the straps that crossed over her tummy were relatively easy to maneuver around. With bows fastened at the neck and hips, she felt like a giant Valentine’s Day gift, all wrapped in crimson just for her Kind Sir.

Mustering her poise, she made her way back toward the tiny kitchen. However, just as she began to stir the chocolate sauce, the first of the three locks on the door turned. 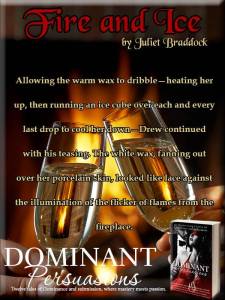 Maxine stopped suddenly, frozen in time. She hadn’t even picked up her clothes yet! Oh, Drew was going to be one Cranky Sir in about a minute.

Folding his hands together, he merely shook his head as he looked around.

“You know I don’t like to punish you on holidays, Almost Mrs. Mack…”

Protest, and he’ll do it! she thought to herself. “But the snow…and Zabar’s was packed…and I wanted to…I just…” She noticed that her voice always seemed to rise an octave when they played.

“What the hell is going on here? This isn’t your bedroom back at the old townhouse, Maxine!” He kicked her bra and sent it scudding across the floor. Through his gruff, though, Maxine could see that smile of approval as he appraised her new little outfit. In his mind, Drew was already unwrapping those bows. “Now, I come here…expecting a little Valentine’s Day release with my fiancé. There’s a mess on the floor. And dammit…she’s not in position yet.”

Turning carefully in those damn shoes, Maxine rolled her shoulders back, the tassels swinging to and fro as she swiveled.

“Uh-uh-uh!” Drew raised his hand as he crossed the room toward her. “Excuses are not accepted, and you should know that by now.”

In one swift move, he’d clasped her hands in his and held them above her head as he pinned her body against the cold stainless steel refrigerator. “Should I deny you on this frigid, snowy afternoon?”

Now was her chance to spill the beans and send her punishment into overdrive. “I can do that myself, Kind Sir,” she insisted. “Without touching myself.”

Raising a brow, his pride swelled. Such a perfect submissive was she.

“Oh, yeah, Sassypants?” he challenged as he pulled his hands away to pluck at her straps. “Show me…”

Maxine took one very slow, deep breath into her lungs. Wrapping her fingers around the refrigerator door handle, she opened her green eyes wide and held his gaze as he watched her. Already, she could feel her clit twitching beneath that damp wisp of satin that covered her, and her nipples throbbed against those little pasties.

However, Drew couldn’t resist closing just a bit of distance between them, fearing she’d collapse and hurt herself as orgasm took hold. Placing a hand on each side of her, he was ready to catch her, just in case.

“And what are you doing in your little fantasy?”

Without warning, she gripped his shoulder as she kicked her heel, scraping it against the hardwood floor. His face was so close, so intense, as she writhed before him but not against him. Drew hadn’t laid a single finger on her, yet orgasm consumed her as her body just shook with the shocks of oblivion.

Drew’s thoughts were likewise awhirl. Her sexual appetite knew no boundaries. Maxine’s need to please him—and to please herself—astounded him. Seeing her shuddering and screaming when all he’d done was simply walk in the door and give her a mild scolding nearly reduced him to ashes.

He fucking hated losing control with her, but he simply couldn’t resist slipping his hands between them to rip away those two little hearts from her nipples. He dipped his head to bite down and pulled one swollen little bud between his teeth.

“So help me, Maxine, if I come in my fucking jeans…you’re getting spanked until next Valentine’s D—”

Reality, however, struck him suddenly like a lightning bolt to a tree.

The power went out.

Out of Order by Bella Juarez

Surrender Her Inhibitions by Nicole Morgan

Under His Protection by Doris O’Connor

The Sub That Got Away by Amy J. Hawthorn

In His Hands by Raven McAllan

Submitting To Temptation by Jan Graham

Fire and Ice (An Excerpt from KNOTTED) by Juliet Braddock