KB: Welcome to Kissing Bandits Blog! Tell us a little bit about yourself! 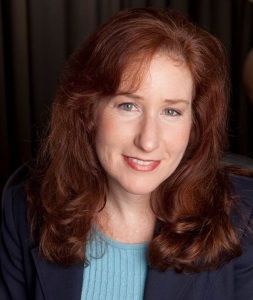 I’m the author of “Free of Malice,” a psychological, legal thriller loosely based on my personal experience and a series of ‘what if’ questions that trace the after effects of a foiled attack; a woman healing, and grappling with the legal system to acknowledge her right to self-defense.

I was born in Valdosta, Georgia, graduated from Georgia Tech with an engineering degree and the Kellogg School of Management at Northwestern with an MBA in their executive master’s program. I spent most of my career at General Electric’s Healthcare division and am currently a Managing Director at a strategic planning consulting firm in addition to being an author.

Free of Malice is my debut novel, set in Atlanta, and supplemented by extensive research with both therapists and criminal defense attorneys. I currently live in Brookhaven, GA, with my fiancé, Richard, and our very spoiled orange tabby, Buckwheat. 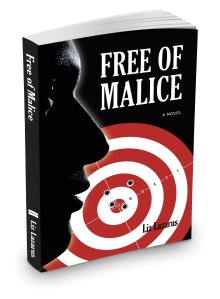 KB: Tell us a little bit about your most recent release.

Laura Holland awakes in the middle of the night to see a stranger standing in her bedroom doorway. She manages to defend herself from the would-be rapist, though he threatens to return as he retreats. Traumatized with recurring nightmares, Laura seeks therapy and is exposed to a unique treatment called EMDR. She also seeks self-protection—buying a gun against the wishes of her husband. When Laura learns she could have gone to prison had she shot her fleeing assailant, she decides to write a hypothetical legal case using the details of that night. She enlists the help of a criminal defense lawyer, Thomas Bennett, who proves to be well versed in the justice system but has an uncanny resemblance to her attacker. As the two work together to develop the story, Laura’s discomfort escalates, particularly when Thomas seems to know more about that night than he should. Reality and fiction soon merge as her real life drama begins to mirror the fiction she’s trying to create.

KB: Pick out one of the best lines in your novel. What do you love about it?

He sounded sincere. But there was this little nagging voice inside of me–aren’t most psychopaths also charmers?

I love this line because it embodies Laura’s inner turmoil in the novel. She wants to trust Thomas – he sounded sincere – but she doesn’t know if she can. What makes matters worse is she doesn’t know if she can trust herself. Her compass, the ability to distinguish reality from fantasy, has been completely upended since the attack. The sixth sense that she ignored that fateful night is now triggering all the time so she can’t rely on herself to figure out what is real.

KB: What are your top three guilty pleasures?

KB: Which of your characters do you connect with the most and why?

Like Laura, I went to Georgia Tech for an engineering degree, though I graduated. Laura transferred to the University of Georgia for a journalism degree. Also like Laura, I live in Atlanta, have an older sister and lost my dad to a heart attack. I suppose all writers have portions of ourselves in the characters we portray, which makes us vulnerable but was the only way I knew to tell the story and be authentic.

KB: Describe how you create characters.

The young, black lawyer character in my book is loosely based on my best friend from college, Thomas Barnette. We met our first day at Georgia Tech when we both got lost trying to find the civil engineering building and we’ve been close ever since. Back then, I had no idea that Thomas was such a talented signer—he kept that part of his life hidden. One day after we had graduated, he played a CD for me in his car and the man’s voice was amazing, kind of a Seal meets U2. I literally didn’t believe it was Thomas so he had to sing to me to prove it. From that day on, we talked about producing a music CD. Ironically, right after I took my leave of absence from work to write my book, a check arrived for some salary I had deferred and it was the exact amount we needed for the CD.

In my novel, the lawyer character takes the stage at Eddie’s Attic, one of the many Atlanta locations that I feature. Here, readers can either pull out their QR app and hear the real Thomas singing Let Me Breathe or go to my website, www.freeofmalice.com and hear it online. To me, it adds another dimension to the book, to hear the character’s voice. Thomas also sang at my launch party and we are planning a few joint events throughout the year.

KB: What is something nobody would guess about you? 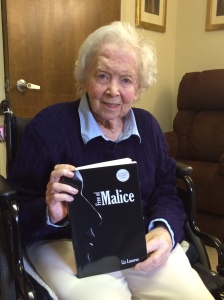 My age – thanks to great genes from my mom and staying out of the sun, I look much younger than I am.  Thanks, mom!

Here she is with an advance reader copy of “Free of Malice” – turning 90 years old this year!

We looked at each other for a moment. Then he propped himself up on his elbow and said softly, “Laura, I feel so helpless. I know it’s only been a month, but…”

“It’s just as bad as that first night. After it happened. Look, I want to make you feel safe again, but I don’t know how.”

He rubbed his eyes and looked away. I waited, staring at him.

What isn’t he saying?

“I know you don’t want to see a therapist, but seeing someone doesn’t mean you’re crazy. Therapists don’t treat just crazy people. They help people who have been through traumas and you have. Hell, no one even has to know.”

He paused for a second.

“Don’t be mad at me, but yesterday I made an appointment for you. I was going to talk to you about it in the morning if you had another bad dream. I found a woman who is downtown by my office. She’s been practicing for about twenty years, got her doctorate from Emory and comes with really good patient reviews.”

He looked for my reaction and continued. “I made the appointment for you at 4:00 so we can go to dinner afterward. You know what you always say. You’ll try anything once, right?”

Enter to win a $25 Amazon/BN GC – a Rafflecopter giveaway