The wait is over! Re/Paired has been re/issued. I didn’t make a lot of changes to the story. The first time through editing, I majorly revised the ending, so this time the beginning got an overhaul. I put in some of the things I had cut out the first time around. Please enjoy Keith and Katrina’s story! Here’s the new cover: 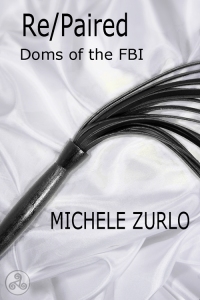 Keith Rossetti grew up the hard way–fleeing from his older sister’s fists and finding addiction at a young age. It’s a miracle he was able to make it into the FBI, and he fiercely guards his relationships with a handful of close friends.

When Katrina Legato’s brother brought home his Marine buddy all those years ago, she fell head-over-heels in love. Ten years have elapsed, and she hasn’t forgotten that toe-curling kiss he gave her for her eighteenth birthday. She knows he’s a demanding Dom who doesn’t respect his submissives or keep them for long, but if that’s all she can have of him, then she’ll take it.

When refusing Kat sends her to another Dom, Keith rethinks his decision. He plans to show her exactly why he’s not a suitable life partner for anybody. But Kat, one of the only women he’s allowed into his heart, isn’t what he expected. She’s no pushover. She demands more from him than anybody ever has, and he finds himself wanting to be the man she thinks he is.

As she repairs his damaged soul, a stalker targets her. Is it just a coincidence that his mother pops back up in his life and his sister is suddenly calling his office?

Here are some awesome things reviewers have said about Re/Paired:

A Night Owl Reviews Top Pick: “This is a great read…The relationship was real and honest, and it was fun seeing Malcolm and Darcy! A highly recommended read!”

“Wow.  This book was so freaking hot!! [Re/Paired] has great balance….heavy on the romance with enough suspense to keep it interesting and that’s how I like it.”–Under the Covers Book Blog

“…Great chemistry…emotional highs and lows…There were a couple of secondary characters that I would like to see have their own story.”–Literary Nymphs
“Lots of hot sex, kink, and a bit of mystery too. The hero and heroine’s journeys are epic, and the goals, motivations and conflicts are all tied up neatly at the end. Zurlo is a good writer, with a huge repertoire of ideas. Please keep them coming!” –Manic Readers

5 Cups/Coffee Time Romance: “A tautly written, sexy, action-packed tale…[Zurlo] employs…the same devastating effect as a flogger in the hands of a skilled Dom. [Zurlo’s] descriptions of subspace stand among some of the finest in the genre.”

Katrina snatched at the stack of panties that was supposed to be on the left side of her top drawer, but she came up empty. The tears blurring her vision brimmed over and burned hot on her cheeks. She’d been stupid to think he wanted this as much as she did. Malcolm had told her several times that Keith was emotionally damaged, that he’d probably never settle down because he didn’t believe he deserved happiness. She’d rolled her eyes at her brother’s dire prediction, but now she saw the truth of his statement. Keith went out of his way to alienate anyone who got too close.

Well, she couldn’t let him do that to her. She whirled around to give him a further piece of her mind, only to find him standing right behind her. He wrapped his arms around her and held her so tight she thought he might crack her ribs.

“I’m sorry. I never wanted this to happen.”

She tilted her face up, though it took some doing to get him to ease his hold enough for her to move. “Keith, just because we disagree doesn’t mean it has to end. I want you to train me, not somebody else.”

The relief in his expression was immeasurable. “I’m not used to such a feisty sub.”

She thought he probably selected subs who capitulated to his every demand because he thought that was the kind of woman he craved. While she knew he wanted a submissive, she also knew he needed someone who wouldn’t let him get away with being a jerk. He needed to be with someone he liked and respected. If she could just keep him around long enough, she could get him to see that.

However, she wasn’t naive enough to give voice to her analysis. “Yeah, well, you needed to spice things up anyway.”

He kissed her thoroughly. It was a comforting clash of tongues and lips, a reacquainting of what they’d almost ended and a confirmation that they hadn’t. When he pulled away, she rested her cheek against his chest. “I need coffee and food before we have any more drama. I’m not cut out for this kind of precaffeine excitement.”

He smoothed a hand down her back. “I have a caramel macchiato waiting for you in the kitchen that’s probably cool enough for you to chug it.”

That sounded good. “Okay. Let me get dressed. You and I have some negotiation to do before we do another scene.” She was sure he would prefer to talk while she was naked, but that wasn’t going to happen. Part of her wondered if being naked last night had short-circuited her brain. The litigator in her needed clothes to function—at least around Keith.

He let go slowly, and she sensed his reluctance. They were leaving his comfort zone, but he wasn’t protesting. He got points for that.

Behind her, the drawer was open. Now that her tears were gone, she could clearly see that it was empty. Her socks and stockings were still there, but her bras and underwear were all missing.

He headed toward the door. “I picked up some more of that Greek yogurt you like. Do you want it with cereal or fruit?”

She whirled and regarded him, hands on hips so he knew she meant business. “What did you do with my underthings?”

He paused in the doorway and looked back over his shoulder. His brows were drawn together, a severe look that only accented the dangerous air he liked to affect. “What?”

“My bras? My underwear?” She exhaled hard through her nose. “I’m not in the mood for games. My blood sugar is getting low, and I really need to eat. Just tell me where you put them.”

The expression on his face changed, melting to that inscrutable special-agent-in-charge look. He swept the room visually. A cold chill raced down her spine.

“I didn’t touch your clothes. I never opened your drawers.” He inspected her bed and bathroom before he slid completely into work mode. “Stay here.”