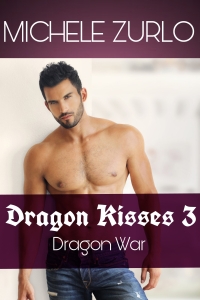 In the months following Jonathan’s transformation, Laurel struggles to come to terms with her feelings for him and the horrific memories of time spent as a dragon’s slave. Jonathan struggles to be patient, but Laurel’s fear is breaking his heart. Niall and Cassie open a popular bakery and revel in the bliss of love and their new lives. Arabella pines for Tobin’s aspects to be reunited, and Nora discovers the secret of creating Zmaj offspring.

Meanwhile all Zmaj braces for the Inamanida attack that Tobin warned them about. When it finally comes, the Zmaj find themselves vastly outnumbered by enemy forces. In the violence that follows, everything changes.

Giving her a half smile, I tried to move our conversation forward. “Can I get one of those baguettes?” I pulled a skirt from my bag. Evelyn and I were in business together, sort of. She made beautiful and functional clothing, and I modeled it so that people would want it for themselves. When I was little, my dreams hadn’t included becoming a fashion model, but that’s what I was. Without electricity or anything approaching technology, my Computer Engineering degree wasn’t going to do crap for me.

Cassie eyed the long skirt. I’d tie-dyed it red myself from crushed beetle shells. Those things were truly everywhere, even in a parallel dimension. They probably wandered through wormholes regularly.

“If you ask nicely.”

My head jerked around to the source of the voice before my brain processed the speaker. Turning, I found myself face-to-face with Cosmo. His jet black hair fell to his shoulders, curling slightly on the ends, and his black eyes regarded me intently. He had a strong jaw and sharp nose that worked to make him more imposing, yet it didn’t detract from his attractiveness.

He didn’t smile as he stood with his arms crossed and his weight leaning mostly on his left side. Our eyes met, and I quickly looked away. Yeah, I was a chicken. I wasn’t going to give sparks a chance to jump between us because I knew I couldn’t handle what he offered. I sidled a glance at Niall, but I turned my attention to Cassie and gave her the skirt. “Next time.”

She opened her mouth to say something, but Niall snaked his hand around her upper arm and jerked her to his side, hissing something for her ears only.

While Cosmo stared at me, Finley came into the store. He grinned when he saw me. “Laurel, you’ve been avoiding me.”

It was true. Though I was friends and business partners with his mother—Evelyn considered them all her son—I made sure my visits to her didn’t overlap with Jonathan’s. To my knowledge, Jonathan had been avoiding me as well. I’m sure if he wanted to see me, Evelyn would have made it happen by now. She wasn’t our matriarch for no reason.

I managed a small smile. “How’ve you been?”

His smile slipped a little. “I miss you. I thought we were going to be friends.”

I really didn’t know Cosmo or Finley, but they wouldn’t see it that way. “I told Jonathan we could continue to be friends, but he hasn’t been around.”

“It’s particularly hard for him to see you. If you reject Cosmo or me, you’re rejecting aspects of him, not the whole of me. Him. Us.”

Laughing at his pronoun slipup wasn’t something I could bring myself to do. Even he couldn’t decide if they were separate people or not.

He touched my hair lightly, bringing my attention back to him. “There’s still hope. That’s my point.”

The second I opened the door, Saskia jumped on me. Though she was small for a Zmaj, that only put her at about 6’2—two inches shorter than me. I caught her, but she was a powerful woman. We fell back so that she pinned me against the wall. She kissed me, her dual-tipped tongue snaking into my mouth to plunder what was hers as she slid her hand into my pants. I moaned as she wrapped her fingers around my cock, bringing it to life.

She broke the kiss suddenly and tightened her grip on my manhood. “You left without saying goodbye.”

“You were asleep. I said goodbye to Stellan.” Technically, I’d sucked his cock. No words had been uttered by either of us.

“You gave sex. This is not the same.”

I stroked a strand of her lime green hair away from her gorgeous face, and I extended the caress down her cheek. “I missed you too.”

Her bottom lip stuck out in a pout. “You will let me come to the bakery next time?”

I exhaled hard, mostly because she squeezed my cock to the edge of pain. “Saskia, you can’t come there because you don’t let me work.” My Zmaj was possessive of me and my time, but we were working on that. When I was at the bakery, I’d banned them from visiting because they inevitably got in the way. Even Taja, who loved to bake, had caused me to burn items too many times. Since they also had duties and responsibilities, they’d agreed to respect and support my career choice. Wrapping my arms around her, I pulled her to my chest. “But I’m not working now, so I’m all yours.”

Slowly her grip loosened, and she slid her hand from my pants. Her finger partially morphed into a claw, and she tugged at the fastener on my fly. My pants slid down my legs to pool at my ankles. I kicked out of them, careful not to move too much because Saskia still had a claw and she was now on her knees in front of me. Her tongue darted out to wet her upper lip. I widened my stance and leaned back against the coolness of the wall because where sex was concerned, I had no control. What my Zmaj wanted, they took—and I gladly gave.

Lifting my cock, she dipped her head and slid her wet tongue over my sac. I sucked air and closed my eyes. Playing light flicks over my sensitive skin, she barely touched me, and I knew the teasing was in some measure a punishment for leaving without waking each aspect that morning. Part of me had done it for selfish reasons—they’d want to have sex, and I’d slept in, so I didn’t have time, and I didn’t have it in me to refuse them. My Zmaj fed from my sexual energy, and so they were the opposite of selfish when it came to sex. They often didn’t care if they climaxed at all. It was a nice bonus, but not the point. Pushing me to the edge and keeping me there—that gave them immeasurable pleasure and more energy than ten meals.

“Saskia.” I moaned her name, a reverent caress that matched how I stroked her hair.

She ran her fingertips up and down my thighs, sending shivers to my belly, and she sucked my sac into her mouth. Warmth closed around my cock, and I opened my eyes to see Taja on her knees next to Saskia.

She winked at me as she drew my cock into her mouth, and then she let it go. “Welcome home, Niall. We don’t have time to tie you up right now, but you will not move.” I frequently disobeyed her orders because when I did, they only did things to me that were even more deliciously wicked. She ran her tongue along the ridge of my crown, and when she went to take me back into her mouth, I thrust, forcing my dick deeper than she’d anticipated.

Immediately, Saskia pulled my balls down, stretching them until I cried out. It hurt and it felt so fucking good. “You moved.”